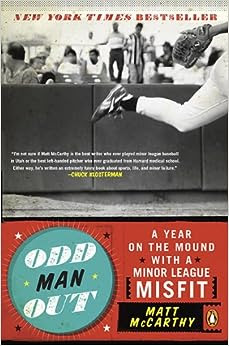 Truthfully this is probably one of the best books I've ever read. It was everything I love in baseball.

Minor league baseball. Quirkiness. The challenges of making the big leagues. And the  characters associated with the big business we know as sports.

To give you a bit more information about the book. I'll of course have to start from the beginning.

Matt McCarthy was a left handed pitcher coming out of Yale.

Threw a 92 mph fastball and other typical stuff. But as you might expect he isn't your typical hot shot prospect.

Drafted in the 21st round of the 2001 MLB Draft by the Los Angeles Angels, Matt gives you a great view of what a minor leaguer deals with throughout their career.

Assigned to Rookie level ball with the now extinct Provo Angels, Matt was in the heart of Mormon country.

You can only imagine what stories came from that.

Since he went to Yale, Matt was a pretty smart cookie. Basically just trying to continue his dream of playing baseball for a living.

Yet what he runs into in the Angels minor league system is your key to the deep dark depths of the minor leagues and the heart of the steroid era.

Inside stories on current and former major leaguers such as Joe Saunders, Bobby Jenks, Joe Blanton and many more.

I can't tell all about the story though. So I'll leave the rest for you to read if you decide to pick up a copy of your own

Thanks for stopping by and reading. Hope everybody has a great rest of their week and God Bless!

Posted by Weston DeShon at 2:51 PM

Under Construction
Bold and Italicized means I have them already.

Check out my COMC and maybe buy something. I've got some cool stuff.
http://www.comc.com/Users/Superduperman99,sl,i100